Have your workers input the actual consumed quantities for each production with this feature, as well as get to know from what Lots were the materials consumed.

When your products have sub-products/consumptions, Prodsmart calculates the amounts consumed when a production is finished. However, sometimes the used quantities may vary from the predicted ones.

For example, lets say your factory produces cakes. A cake consumes materials such as Eggs, Flour and Sugar.

You know that each cake consumes 3 Eggs, 350g of Flour and 100g of Sugar.
However, the quantities that were actually used may be slightly different (e.g. if a egg is not good, a different one must be used).

In order to have your stocks updated correctly in real time, your workers can directly input the actual consumed values.

After inputing the quantity produced, if that operation requires the consumption of materials, it will be prompted with the consumed quantities, as shown in the image bellow. 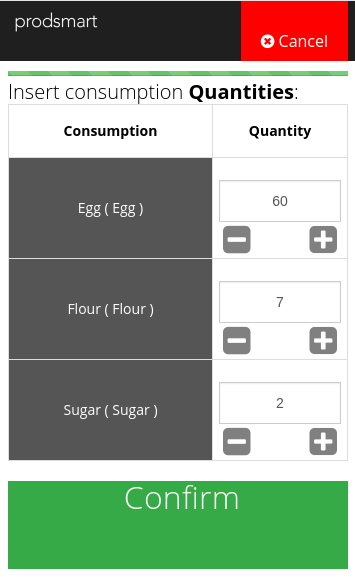 Quantity fields will be pre-filled by Prodsmart with the predicted quantities. Your worker will just have to update the values that vary.

If you want to know from which Lot those materials have been consumed, you can also do that. If you attribute a Lot Number to your materials you can have your workers specify from which lot they were consumed, as can be seen in the following image. 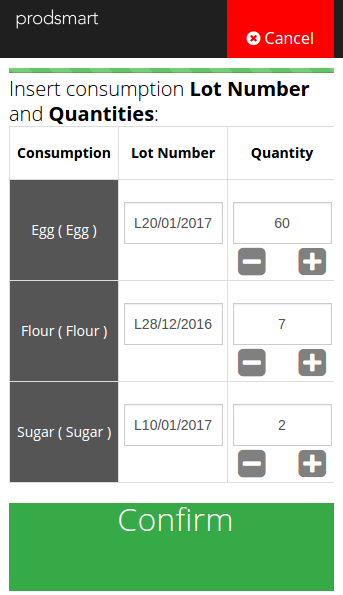 You can use the barcode reader to scan the barcode and automatically introduce the lot you have consumed in your production.

In case you want to manually insert the lot information for each material, it will be pre-filled by default by our system, using the oldest lot.

When you check your Stocks and Stock Movements, you can filter them by Lot Number and confirm the quantities in each Lot.

In order to use this features, you just have to ask Prodsmart Support Team and we'll activate them for you and guide you through the process.